JOY filled the hearts of the parents, Arumugam Pillay and Angammal at the birth of a male child, as predicted by a mystic seer, in the month of Chithirai with Bharani star ascendant. They named the child Ramasamy at the instance of Saint Kasilingam who blessed the enceinte mother before the birth of Samikal.

FULL of ardour young Ramasamy set out on his spiritual path blessed by Lord Siva who appeared in human form and wrote on his tongue the Pranava Pantra when he was five years old. Other great teachers also blessed him like Sattisami who showed him God as Lord Muruga and Achaandamalai Paradesi who initiated him into the Sariyai (service) Kiriyai (worship) Yoga (meditation) and Jnana (wisdom) to attain God.

MIGHTY things young Ramasamy did which ordinary mortals could not do. Stones changed to sugarcandies. Snakes obeyed him. Ramasamy cured people of snakebites and other ailments. His school could not tie him down to its daily routine, for Ramu gave the first preference to succour the distressed.

MANY years of spiritual sadanas Ramasamy continued to have and his service in the Kannivadi Zamin continued till Ramasamy made up his mind to give up service so as to devote himself fully to the service of mankind. 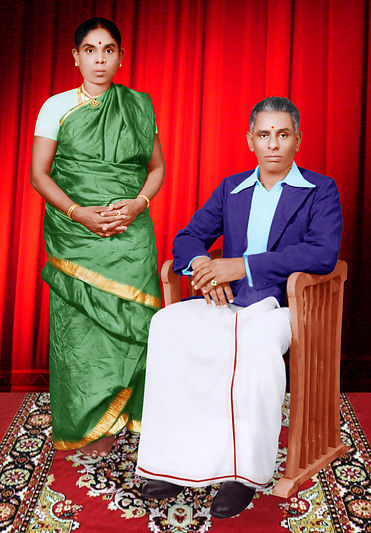